A Sign From God – Circular Rainbow Around The Sun

The spiritual yoga camps take place in the spectacularly beautiful mountain resort Herculane and at the seaside resort Costinesti.

Thousands of yoga students flock from all corners of Romania and many other parts of the world to take part in these exceptional and, in my opinion, unique events.

Every year the international yoga camp brings new revelations and deeper understandings which in a mysterious way correspond exactly to the needs of each of the participants. The divine integration of all the spiritual activities of the camp creates a magical field of opportunities to learn and practice the wise teachings of yoga and tantra. The presence of thousands of people from all over the world united by the same aspiration empowers even more the magical field of the camp.
This year in Herculane, towards the end of the camp, along with around a thousand other people i witnessed the fascinating phenomenon of a circular rainbow structure in the sky. This extraordinary event of this year’s camp happened on the 8th of May 2010. In the middle of the day around 13:30, when all the yogis were preparing for one of the yang spiral meditations on the Coronini Plateau, an unusual phenomenon occurred; a circular rainbow appeared around the sun, then a second circle of light appeared which was at the same height as the sun above the horizon. It was a perfect day, and the sky was vividly clear, there was no mistaking that these two circles were a miraculous occurence, remaining visible for 22 minutes, all of us who witnessed this were equally amazed at the beautiful and magnificent sight. 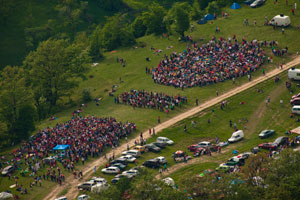 According to a local newspaper Caras Online which reported the unusual event , Tiberiu Pincova, one of the first to see the rainbow said:

I am always carrying with me a camera, wherever I go, photography is a passion for me. But I have never seen anything like this.

Petrică Stolojescu, another man who lives in the area said:

It is a beautiful and grandiose phenomenon, it sent shivers down my spine. It is magnificent.”

There was a lot of light in the sky, almost too bright even for midday. This is why I looked at the sky. Perhaps it is connected to the energy of the yogis who make spirals on the plateau.

The yoga students who witnessed the event realized it was much more than just an optical phenomenon of great beauty. They had already participated in the International Yoga Camp for eight days, and had attended daily exemplification meditations, artistic performances, spiral meditations, and lectures which had increased their transfiguration and opened their souls. For all of us present in that moment in Herculane, this was a sign related to the preparations for the events to come, a wonderful validation and Divine dialogue of the Universe with the people who were paying attention.

The whole event becomes even more significant if we consider that, shortly before the appearance of the two circles of light, we were preparing for a yang spiral meditation followed by a special conference of the Charismatic Theophanic Movement, (an initiatic movement started by MISA in 2009). Eyes full of transfiguration and spiritual aspiration the ones who witnessed the splendid phenomenon of light saw it as a miraculous manifestation of the grace of God, and a sign of divine integration into the Universe and into Nature, which appeared in connection to the Charismatic Theophanic Movement.

For those who do not know, Theophany, from the Ancient Greek Τheophaneia (meaning “appearance of God”), referring to the appearance of God to a human, or to a divine disclosure; a sign by which the presence of God is revealed.

On the other hand in all traditions and cultures the rainbow has been associated with divine harmony, beauty and goodness, and seen as a bridge or a means of communication between God and man, between spirit and matter. In the Bible the rainbow symbolizes the covenant God had with Noah after the flood.

And the bow shall be in the cloud; and I will look upon it, that I may remember the everlasting covenant between God and every living creature of all flesh that [is] upon the earth. ” (Genesis 9:13-16)” 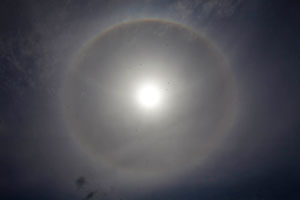 The rainbow appears in other parts of the Bible, as well as in different other traditions which depict it as a direct manifestation of God (a theophany) or as a sign of God’s grace. Other meanings associated to the rainbow are peace, hope, new beginnings, a gate to the divine realms, mystery, purity and wholeness of the creation.
From a scientific perspective, a circular rainbow, a halo, is a type of optical phenomenon, forming a circle 22° around the sun. It forms as sunlight is refracted in tiny hexagonal ice crystals suspended in the high layers of the atmosphere. The parhelia circle, which sometimes appears together with the halo, is a white band circling the sky always at the same height above the horizon as the sun. Millions of ice crystals with their vertical faces, each mirroring the sun around the sky, form the circle.

Although science is able to explain very well the mechanisms through which such phenomena appear, the chain of atmospheric events which lead to the alignment of the clouds filled with ice particles with the light of the sun in a perfect configuration remains a profound mystery. Although science tells us how, it cannot tell us why. When trying to explain the phenomenon we forget to explain the most significant of all the facts and this is the perfect synchronization between the human actions and cosmic events.

From the perspective of the soul, the miraculous appearance of the two circles of light above Baile Herculane on the 8th of May 2010 shows immediately its value as a sign of God’s presence and Grace by those who were prepared to grasp its profound meaning. Most people remembered that the year before, on the 9th of May 2009, the day when the Charismatic Theophanic Movement began, a circular rainbow had also appeared on the sky. The fact that this unusual and amazing phenomenon occurred not once, but twice in connection to the same kind of events proves beyond doubt that it was much more than a random optical effect.

Enjoy the images and the beautiful sights from Herculane.